Social Sense has recently concluded a successful 12-month project with local secondary schools in Salford, promoting healthy relationships and tackling the misperceptions that exist around domestic violence and abuse (DVA).

Building on a successful pilot in Salford where an overall 18% positive impact was recorded, the roll programme out maintained and improved its impact consistency, seeing improvements in 85% of the questions answered pre and post intervention.

A further aim is to address misperceptions and educate young people about the true norms surrounding healthy relationships and to inspire them to display and promote resilience-building values.

There is also strong emphasis on reducing barriers to reporting through peer to peer support and greater visibility of support services, which led to 11 disclosures being made throughout the project.

Applying well established techniques from our R U Different? programme, students first take part in an online survey to uncover their own attitudes and experiences surrounding DVA.

The same students then attend a workshop where discussions are opened up around the topic.

We then ask them to create campaigns; with the knowledge that youth-led messaging can create huge impacts to the school and communities. The campaigns will either promote the signs of a healthy relationship or the support channels available to people who may need them.

The winning ideas from young people are professionally co-created with the Social Sense studio and displayed around various schools. Below are a selection of some of the winners: 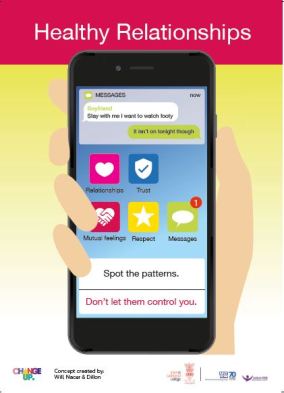 An additional unique part of the project was for the students to create campaigns for younger pupils and these were sent to nine local primary schools in the area who reported positive feedback.

Repeating the survey with the same cohorts involved in the intervention found some interesting outcomes including:

The quantitative findings were supported by a number of representative Focus Groups with young people and teachers, allowing independent researchers to probe and expand on findings.

Combining all of the data, the University concludes that the project has a societal value to Salford of £269,631 – an £8.29 return on every £1 invested. The University also forecasts a 10% reduction in expected DVA cases arising from within the cohort engaged.

What people said about the project:

“For some of them, I think they saw their own relationships. A couple of them have spoken to us since. Quite a lot has come out of the programme and then it’s up to us to pick those bits.” Teacher from a Secondary school.

“We recommend the continuation of the Change Up programme to build an evidence-base of the efficacy and impact over time.” – University of Salford.

“The project cements our long-held belief that preventative, resilience building programmes are critical to creating more life chances for young people and taking vital pressures off our public services. For a University to independently recognise the programme in social and economic terms is incredibly motivating and will drive us on to further improving it.” Gary Lovatt, Social Sense CEO.

“Salford CCG were pleased to be able to support the ‘Change Up’ through our dedicated Innovation Fund, and it’s hugely encouraging to see this locally developed initiative making a difference to young people in Salford.” Salford CCG.

For more information on the programme, please click here.